As the Lindsays National Cross Country 2020 approaches, there are plenty of honours up for grabs. But one that nobody has attained since 2001 in the Senior Men’s race, is the glory of three individual golds.

While six athletes currently have two wins under their belt, it’s been many years since anyone attained that elusive hat-trick in the men’s race – so we take a look back at those who have achieved it in years gone by.

The National Cross Country Championships at Falkirk will be the 123rd running of an event since its first running at Lanark Racecourse on 27th March 1886 (at 4.15 p.m.).

The Glasgow Herald reported on that first running – these are extracts:

The first annual cross country championship of Scotland took place here to-day, and it could not be said to have been altogether a success. The weather was of the most wretched description, a soaking rain having fallen through the entire day…

The event was originally fixed for the 13th but owing to the course being covered with snow to a considerable depth and the hard frost at that time, the committee arranged to postpone it till today. Much regret was expressed that the West Country Harriers were so poorly represented, and that they had failed to send more than half the originally fixed team of 12. The sport is a very exhilarating pastime, and deserves to become more popular with amateur athletes, and doubtless the fixtures which the Scottish clubs have this year with English clubs will do much to spread its popularity. There are only two Harrier Clubs in Scotland worthy of the name-the Clydesdale and Edinburgh-and representatives from these took part in the race…

The course over which the championship was contested was as nearly as possible (though slightly under, in our opinion) ten miles. The turf was in an exceedingly spongy state, and consequently it was very heavy going; but, notwithstanding, the time of the winner was really an admirable performance. There was little betting, and it was confined entirely to the individual runners – it being considered a foregone conclusion that Edinburgh as a team would be the winners.

Edinburgh Harriers duly won the race, beating Clydesdale Harriers by 35 points to 47, but the individual winner was the joint third favourite (at 4 to1), Ayr F.C. footballer A.P. Findlay, running for Clydesdale. 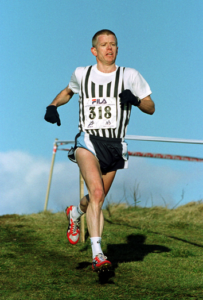 In recent years, the men’s races have been tightly fought and a pattern has emerged since the turn of the century with no athlete being able to achieve a hat-trick of successes. In 2000, Kilbarchan’s Robert Quinn won for the third year in a row, recording his 4th overall win and the following year Chris Robison won his third title, spread across eight years and three different clubs, Spango Valley AC, Shettleston Harriers and Inverclyde AC.

In the 18 races since then, six athletes have won the men’s title on two occasions each – Glen Stewart, Mark Pollard, Alastair Hay, Derek Hawkins, Andy Butchart and Callum Hawkins.

That feat of three consecutive titles has been achieved by only eight athletes in the 122-year history of the men’s championships.

Clydesdale’s Andrew Hannah was a noted athlete in the 1890s and won the title five times and at the end of that century Jack Paterson of Watsonians became the first athlete to win three consecutive races. 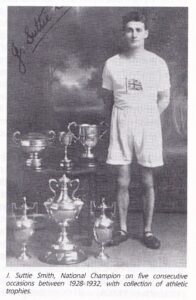 That feat was repeated between 1923 and 1925 by the great Dunky Wright, later the Commonwealth Games marathon champion, who recorded four wins in total, before the Dundee runner John Suttie Smith raised the bar to a new level by winning five consecutive title races between 1928 and 1932. Suttie Smith was one of the outstanding Scottish distance runners. In addition to winning the cross country championship five times, he won the Scottish 10 miles track championship four times and the four mile championship three times.

Shettleston Harriers’ James Flockhart (1930s) and Eddie Bannon (1950s) both won the championship four times, Bannon being able to achieve the treble between 1952 and 1954. In the 1960s, Fergus Murray of Dundee Hawkhill and Edinburgh University added his name to the treble winners, a feat that eluded Jim Alder whose three wins were spread over 10 years.

The 1970s and 80s saw some of the great names of Scottish distance running feature among the medal winners – Lachie Stewart (2 gold), Ian McCafferty (1 gold), Jim Brown (1 gold), Adrian Weatherhead (3 silver), John Robson (2 silver), Allister Hutton (2 gold), but it was a greatly unheralded athlete who dominated the race in the mid-70s. Edinburgh University architecture student Andy McKean (no relation to Tom) had been victorious at the British and Scottish Universities races in 1973 and in the words of Ron Marshall, “he took on the strongest possible domestic field and routed them.” The following year, he lost out to Jim Brown, but between 1975 and 1977 he achieved a hat-trick of victories to join the select band. 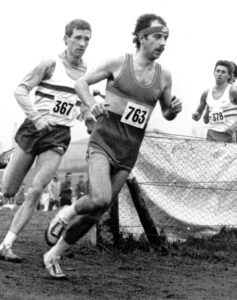 And then came Nat Muir. No matter where we look in Scottish distance running in the 1980s, we always seem to arrive at Nat. The 1978 Junior champion, he won his first senior championship at his first attempt over the new venue of Livingston in 1979. He followed that up with victories in 1980 and 1981 to become a treble-winner before his 23rd birthday. Upset by winning only bronze in 1982, he then went on to equal Suttie Smith’s streak of five consecutive wins in the 1930s, winning the five titles between 1983 and 1987, to make him the most successful athlete ever at these championships.

There is no such problem in stringing together consecutive victories for Central AC in the men’s team event, who this year will be aiming for their 10th consecutive title. Their win in the 2019 event took them past the previous run of 8, put together by Cambuslang Harriers between 1988 and 1995. Central still have a bit to do to go to the top of the table for team wins however, led by Shettleston Harriers with their 19 victories.