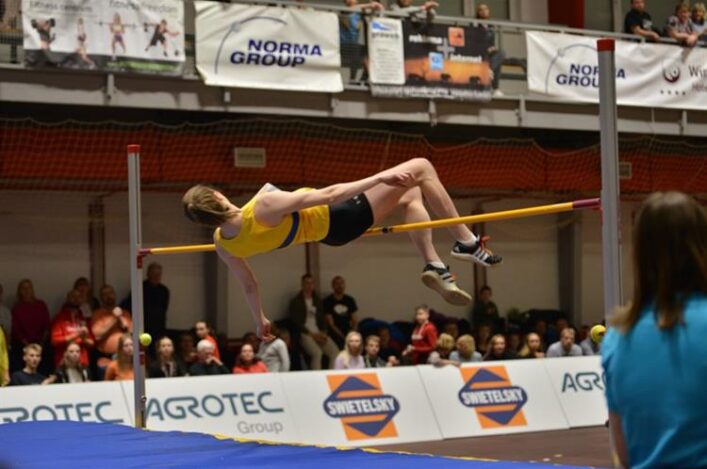 The 2014 Commonwealth Games in Glasgow was the first time in the history of the event that the Scotland team contained three women high jumpers. With Emma Nuttall announcing her retirement this year, it means that all three team members – Jayne Nisbet and Rachael Mackenzie were the others – are no longer in the event.

Time moves on. Already this year, Nikki Manson, who was a late addition to the 2018 Games team, has improved her Scottish indoor record to 1.93 metres and tops the British rankings and our top junior, Carmen Neat has improved her best to 1.77 and sits 2nd in the British under-20 lists.

Success in the women’s high jump was a long time coming though. The first 5 feet (1.52m) high jump in Britain was recorded by Phyllis Green in 1925, a world record at that time. Scottish high jumping was well adrift and while the Scottish record was jointly held at a tantalising 4’11½” in the late 1930’s, it was not until 1951 that the elusive 5 feet height was reached, 26 years after it had been achieved at the WAAA Championships in England.

That height – 5’ 0⅛” to be precise – was achieved by the Glasgow University student, Dorothy Walby, who improved to 5’ 2” that same year. Sadly, I believe that Dorothy (Dr Dorothy Williamson) is no longer with us, having passed away in January this year at the age of 90.

Marjory Bain took over as Scottish record holder later in the 1950s and I had the pleasure of meeting her last year. Also a Scottish hurdles record holder, she took the high jump record up to 5’ 3½” (1.61m) in 1960, a record which lasted for seven years until bettered by Moira Maguire (then Moira Walls).

As Moira Walls and Ruth Watt emerged as the two most successful high jumpers that Scotland had produced up to that point, the standards moved sharply upwards. From Moira’s first record of 5’ 4” (1.63m) in 1967, the two athletes were sharing the Scottish record at 1.73m just four years later.

In 1970, Moira became the first Scot to win a high jump medal at the WAAA Championships, in the 44th year of the event. That same year, she was Scotland’s representative at the Commonwealth Games in Edinburgh where a 3rd time clearance at 1.70m saw her win the bronze medal, having previously placed fourth in the pentathlon and fifth in the long jump.

Progress continued rapidly. In 1973 and 1974, Ruth Watt bettered the Scottish record five times culminating in a superb 1.80 clearance at the British Games at Crystal Palace, a feat she equalled one month later at the European Championships. This was Ruth’s last year at the event, competing at both the Commonwealth Games in Christchurch, placing 4th, and the European Championships in Rome.

Moira Walls had competed infrequently in 1972 and 1973 but returned refreshed in 1975, now a member of Edinburgh Southern Harriers, and equalled Watt’s national record of 1.80 when helping the club to win the Pye Gold Cup at Crystal Palace.

Moira dominated the event over the next few years, improving the Scottish record to 1.82 in 1976, 1.83 in 1977, 1.84 under her married name of Maguire in 1979, then up to 1.86 later that year before, in a Scotland v England v Ireland international at Meadowbank in 1980, she cleared a magnificent 1.87, not only setting another Scottish record but becoming the first Scot (and the only one to date) to hold the British women’s high jump record.

Moira continued high jumping until her retirement as an athlete in 1985 after a remarkable career. By that stage, her replacement as the top Scottish high jumper had already been found. Inverness Harrier Jayne Barnetson had not been born when Moira Walls set her first Scottish record in 1967, but by 1984, she was at the top of the Scottish rankings, clearing 1.85 as a 16-year-old.

The following year, she claimed the record, clearing 1.88. She frustratingly finished 4th at both the European Junior and World Junior Championships, but at the 1986 Commonwealth Games at Meadowbank, an ankle injury sustained at the Games caused her to be carried off on a stretcher from the field and her career was to take a different direction.

The peak of her achievements and, sadly, her last year in the sport, was in 1989, retiring at the age of 21. The Scottish heptathlon record holder, her high jumping was strong as always, and at the Miller Lite IAC international at Meadowbank in a marvellous competition with the American Jan Wohlschlag, Jayne cleared 1.91 on the second attempt to set the outdoor record that has now lasted over 30 years.

Although that record still stands, we have certainly had our share of top high jumpers since then. Rhona Pinkerton (best of 1.83) topped the Scottish rankings in the early 1990s; Troon athlete Hazel Melvin emerged in the 1990s, hitting a high of 1.85 in 1997; and before she went on to multiple track medals, Lee McConnell was an outstanding jumper with a best of 1.88 in 2000.

Aileen Wilson, daughter of internationals David Wilson and Wendy Blackwood, led the 2001 rankings at the age of 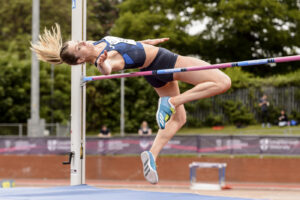 17 with a marvellous 1.87 which earned her the World Youth title but, like Jayne Barnetson, found her career thwarted by injury. And so our 2014 Commonwealth Games trio came to the fore – Jayne Nisbet topped the rankings for five years between 2006 and 2011, and Edinburgh AC clubmate Emma Nuttall also had five years at the head between 2000 and 2015. In 2013, Emma became the first Scot to win a British high jump title with 1.87 and in Commonwealth Games year, the two athletes battled each other for the indoor record, Emma clearing 1.86, Jayne 1.87 and Emma 1.88 in the space of two months. Inverness’s Rachael Mackenzie rose to the occasion too, clearing a career best 1.81 to gain selection for the Glasgow Games.

And here we are at the present day. Nikki Manson was ranked fifth in Games year with 1.70, having cleared 1.77 the year before. She cleared 1.80 in 2015 but in 2018, set new Scottish indoor figures of 1.90 at the Emirates Arena. This year has seen that record increase to 1.92 and 1.93, with Jayne Barnetson’s outdoor record under threat in the summer.

Scottish women’s high jumping has come a long way since Dorothy Walby became the first to clear 5 feet and we mourn her passing.