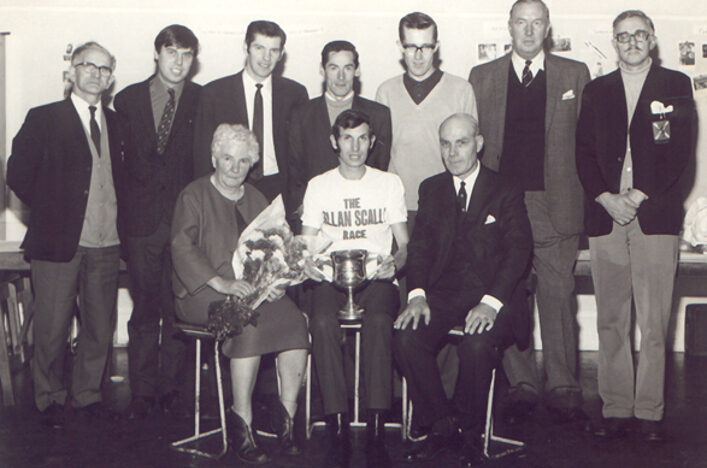 The Allan Scally Memorial Road Relay Race first appeared on the Scottish running calendar on 22 November 1969 and this February will see the 50th running of the event, having been held each winter season excepting 2017-18.

The race commemorates the work done for Shettleston Harriers by their former coach, Allan Scally, a professional 10 mile world champion, who had died in April 1966 at the age of 62. The main force behind the club’s success in the 1950s and ‘60s, he was also the coach to many very good athletes including Joe McGhee, 1954 Empire Games Marathon winner. 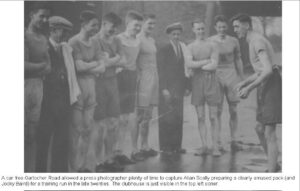 The race started and finished in Camp Road, Baillieston, between two places closely associated with Allan, St Bridget’s School and Maxwell Park. The race was a 4 x approximately 5 mile relay and that inaugural event was fittingly won by the host club, Shettleston Harriers. The race was not favoured by good weather, Ron Marshall, the correspondent for the Glasgow Herald, reporting that “Not one of the more experienced men I spoke to could recall a more lethal combination of bitter wind and freezing rain which conspired to drive horizontally at the purplish souls for most of their journey.”

The winning Shettleston team in that first race was Dick Wedlock, Lachie Stewart, Henry Summerhill and, appropriately, Bill Scally, son of Allan. Dick Wedlock led the way with the fastest leg of the day, 23:18, an outstanding performance in the conditions.

Shettleston Harriers won the race in each of the first five runnings, with Wedlock and Lachie Stewart team members in all five races. To date, Shettleston has won the relay on 19 occasions.

The Allan Scally race grew in importance after that first year, the ideal preparation for the Edinburgh to Glasgow road relay. It increased in numbers, helped by incorporating the Scottish Universities Road Relay Championships. It attracted the top Scottish road runners and the athletes who have recorded the fastest legs in the race each year reads like a history of Scotland’s top middle-distance runners: Wedlock, Gareth Bryan-Jones, Jim Brown, Norman Morrison and Andy McKean headed the times before we reached the Nat Muir years.

in 1976 Jim Brown anchored Clyde Valley AC to victory with the first sub-22 minutes leg in the race of 21:55. The following year he again broke 22 minutes with a 21:59 run but 51 seconds later, the  European Junior 5000 metres champion, Nat Muir, brought Shettleston home in second place, having run a 21:52 final leg.

The year after Nat’s last race saw the introduction of a women’s race, running three legs instead of the men’s four legs. Shettleston Harriers Ladies recorded the first success, with Allan Scally’s granddaughter, Elaine Mackay, running the final leg. As with the men, Shettleston has recorded the most victories, having won the women’s race on nine occasions. The women’s race has had no dominant athlete with the most successful being Kilbarchan’s Elspeth Curran, her victory over the shorter 2019 course giving her a third ‘fastest leg’ honour.

The 1990s saw the Racing Club years, the race dominated by the Edinburgh club under their various guises. Racing club drew members from the two main Edinburgh clubs, Edinburgh Southern Harriers and Edinburgh AC, and were filled with the top distance runners from these clubs: Tom Hanlon, John Robson, Glen Stewart, to name but three. They attracted sponsorship and won the race as Racing Club Edinburgh, Leslie Deans Racing Club and Mizuno Racing Club. Between 1991 and 2000, they won the Allan Scally on seven occasions. Glen Stewart was a key runner for the club. In 1996, with a 22:08 final leg, he turned a 10 second deficit into a 50 second victory for Mizuno Racing Club. That race could have had more interest as Liz McColgan was set to run for Dundee Hawkhill’s men team until her coach, Grete Waitz, decided she should have no more races before the Tokyo marathon.

In 2003, Racing Club had lost their sponsorship and disillusioned with the state of road running in Scotland, in particular the cancellation of the historic Edinburgh to Glasgow race. They had notified their disbandment to the governing body shortly before the 2003 race but took part for the last time as an unofficial guest team. Of course they won the race but could not take the title, Fife AC taking the official victory.

Times and standards slipped in the following years. Shettleston had set the course record of 89:18 in 1995 but between 2003 and 2007 no team bettered 95 minutes and the 2005 fastest leg of 23:42 was the slowest time to achieve that recognition in the history of the race, over two minutes off the course record.

The arrival of refugees from Eritrea gave the race and Shettleston in particular a shot in the arm. Shettleston took the title in 2008 with a team including three Eritrean refugees. Had they selected the fourth, who was in their B team, they could have won the race in a time 40 seconds quicker!

The race continued in its original form to 2016 and fittingly, Shettleston won the 2016 and 48th running. After a temporary hiatus, the race returned on 2nd March 2019 over a new 4 x 5k course with Central AC victorious, Shettleston winning the ladies race and Edinburgh and Glasgow winning the Scottish Student titles.

It is a new era for one of the most historic Scottish road races.

For a complete record of the race winners and the fastest individuals, see https://www.scotstats.net/results-1/race-records/allan-scally/

Below: Allan Scally with two of his athletes Joe McGhee & Graham Everett; A recent race 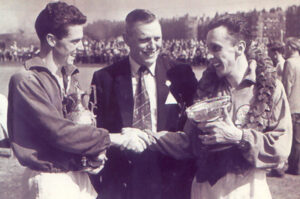 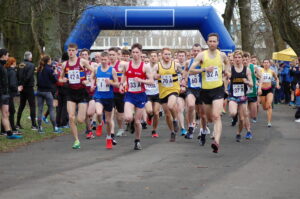